Maria Luiza Valcazara recently moved into a new apartment by herself in Brazil. She thought it would be a good idea to have a dog, so she adopted Chips, her new pup. It wasn’t long before they bonded.

Sometimes, Chips gets sad when she would leave him at home. It turns out that someone noticed his sadness.

Many dogs suffer from separation anxiety and get lonely when they are home alone. Chips would whine and bark until she came home again.

Since Valcazara was still new in the area, she didn’t know her neighbors. She was hoping that Chips wasn’t disturbing anyone while she was gone.

One day she came home and there was a package with a letter outside her door.

“At the time, I was scared,” Valcazara told The Dodo. “I wondered who could have left it there at the door, since I had little contact with the people in the building.”

Valcazara got nervous when she found out that the letter was addressed to her dog. It had actually been ‘written’ by Corote, another dog.

When she opened the package, she found some dog toys inside.

This is what the letter said, after it was translated from Portuguese.

I’ve noticed that you’ve been crying a lot when you’re alone, and I’ve been through this phase.

I talked to my mom yesterday and together we decided to give you these toys, so you have a distraction when you feel alone.

I’m here to make you an invitation: I live alone with Mom and, because of that, I have a room of my own to horse around in as much as I want, so you can spend some time here with me! We can do a lot of partying together!!!

We hope you enjoy the things we gave you!

Many kisses from Corote and of my mother Nichole.

“When I started to read the letter, I cried a lot,” she said.

Valcaara had not yet met Nichole or Corote but they knew of her. Considering the invitation, a proper introduction was in order.

“I took Chips to [Nichole’s] apartment so we could talk and our two dogs could meet,” Valcazara said.

The dogs and their owners became friends quickly.

“Nichole offered to help me with Chips whenever I needed it,” Valcazara said. “She gave me some tips she learned from raising Corote.”

Things have gotten much better.

The tips that Nichole offered helped to ease Chips’ anxiety with his mother was away. The friendship that they forged made it possible for a lot of fun. Almost every day, they meet up for a playdate on the lawn out in front of the building where they live.

Funny how this all started with a simple letter.

“I concluded that there are still good people in our world,” Valcazara said. “It was a beautiful gesture Nichole made for us. And I’m sure other people can benefit through their animals, too. I am an example of this. Besides having a neighbor, I now have a wonderful friend!”

I’m sure Chips and Corote would agree. 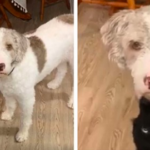 Dog Can't Believe His Family Got A New Puppy Without... Diver Gets Super Excited When She Meets A Giant Jellyfish