We don’t deserve dogs – plain and simple. Recently, a poor dog traveled 125 miles to return to the home she’d known, with an owner who so callously got rid of her only a few months after first getting her.

Manora, or Maru as she’s nicknamed, is a bull mastiff who was bought from Alla Morozova, a breeder in Novosibirsk, Siberia, by a couple when she just a five-month-old puppy.

Six months after that, the owner got in contact with the kennel, saying that she no longer wanted Maru because she was “allergic.”

The couple put Maru on a train with an attendant so that she could be sent back to her breeder.

However, the train ride turned out to be a very scary and traumatic experience for Maru. The poor dog had a panic attack when the train was stopped about 125 miles from her home, in a station at Achinsk.

Breeder Morozova told the Siberian Times, “The dog jumped on the compartment door, kicked the handle to open it, and almost threw the conductor out of the way. She jumped out like a bullet. When the door opened to the platform, she jumped out into the night.”

Maru clearly just wanted to go home, but sadly she had no understanding that she was being abandoned because she was unwanted.

Maru didn’t look back after leaving the train.

Her former owners were made aware that Maru had gone missing, but Morozova was told that they had no interest in the matter and didn’t want to have anything to do with her, much less be bothered looking for her.

“That angered me. The owners were not upset at all, like, well, the dog is lost and that’s all right. That was their answer,” Morozova said. “They gave the dog away and the load fell off their shoulders.”

Maru was eventually found very close to her previous home, about 48 hours later, as she tried to locate her owners.

“She had walked and run for two and a half days. Luckily, neither bears ate her, nor wolves chewed her up,” Morozova explained.

When she was found, Maru was in very bad shape. She even looked as if she’d been crying.

“Volunteers found her in an industrial zone. The dog was very tired. She was lame, her paws were broken. The pads were damaged. Her muzzle was broken. Maru fell from the railway embankment,” Morozova said.

She added, “She did not run to Novosibirsk, she wanted to go back where she lived. It is surprising that she went the right way.”

Maru is now getting treatment for all her injuries. Hopefully, soon she will receive the love and care she deserves with a loving family. We’re sending Maru all our love and good energy for her recovery and future. 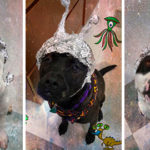